Hi everyone! Thank you for all the support and interests in TPK. On October 15, 2019, our blog has officially merged with EQ Studios' main site. We will still be keeping this page, but newly blogged content won't be posted here. We apologize for the inconvenience, but believe it's a better move in the long run for our fans and us. Be sure to follow us and subscribe to our mailing lists for latest news, free newsletters, and development blogs on the links below!

It’s been over two years since The Painscreek Killings (TPK) launched on September 27, 2017. Prior to that, it took a little over five years to develop. Looking back, TPK struggled in development and failed in marketing, but sold about 40,000 units as of today and somehow was able to keep us afloat as a startup company. Was it all worth it? We would say yes. But that’s not what this article is only about.

What we hope through this postmortem is that we could share our experience from start to finish with those who are in the same boat as us - indie developers creating mystery investigation games using the walking simulator formula - to take what worked for us and hopefully avoid the pitfalls that we faced.

On January 21, 2019, eleven months after the initiation of The Johnson Files and three pre-alpha builds later, we have decided to return to the drawing board and reboot the project. Here's what happened and how we ended up with the decision.

The initiation of The Johnson Files
It was supposed to be a short development project, no longer than a year to pull off. The idea for it first started when we felt TPK needed a demo. After coming up with initial drafts for it, we deemed the process of making a separate game just for a demo time consuming with little return, so we abandoned the idea and decided to make the TPK's act 1 a complete playable demo. With the demo released on Steam shortly after and a possible game idea sitting on the side, we decided to develop it into a DLC. It was then that The Johnson Files was born.

What we have been doing since releasing TPK 14 months ago

It's been a few months since we posted our last blog, and that was before we released the Japanese localization of TPK. So what have we been doing since? Specifically, what have we been up to after releasing TPK? Quite a bit actually.

September 2017 - June 2018
The Painscreek Killings was released on September 27, 2017 and right after that, we realized one of the biggest problem players faced was falling-through-the-world issue. We tried to find out the reason but could not replicate the problem. We did narrow it down to a few possibilities. Nevertheless, it was a big issue and we decided to try and fix it. In doing so, we tackled game optimization, fixed the issue, and made the file size smaller, something which we were unable to pull off prior to the game's release. The good news is that our game can now be played even on computers with decent specs. The bad news is that it took us 9 months to make it happen. By then, we were told that our game was a 'dead product' from a marketing standpoint. Dead product or not, we did not want to give up on our game.

Japanese language for The Painscreek Killings is almost here 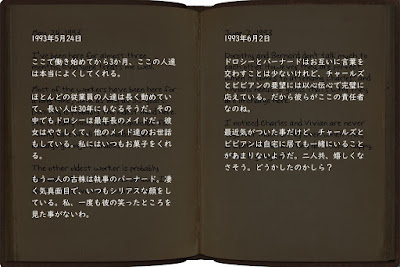 We have been hard at work localizing The Painscreek Killings (TPK) into Japanese. It took us a few months to translate approximately 30,000 words and it's almost here! We are currently making sure the game runs without a hitch and at the same time looking for Japanese gaming press who might be interested in taking a stab at it. With the inclusion of the Japanese language, we hope more mystery detective gamers can have the opportunity to play TPK!
at September 12, 2018 No comments:

Throughout our five-and-a-half years of developing The Painscreek Killings, we designed 9 custom buildings, developed 20 characters, constructed more than 100 documents (consisting of diaries, newspapers, flyers), produced more than 900 props (half of which were not used for the final build), and wrote about 26,000 words. Along the way, our team grew from two to seven members. Yuri, our one and only programmer, worked from Japan while the rest of us were stationed in the United States. Looking back, we could not have managed it without a few, essential collaboration tools. Surprisingly, most of them are free.

Hi everyone. As of today, we've finally finished optimizing the game. This includes the Mansion, which is the heaviest scene in the game, as well as all other smaller and medium-sized scenes which were not originally part of the optimization but we decided to include them as well. Improvements to the game are as follows:

1. Reduced the game's file size from 18GB to 10.6GB, a reduction of about 40%.
2. Reduced RAM usage by approximately 40% when accessing the Village scene.
3. Reduced RAM usage by approximately 30% when accessing Mansion and Hospital scenes.
4. Improved Unity's batching process by about 40%, which is the number of files needed to be read by the CPU, especially when accessing the Mansion and Hospital.
5. Improved load times when switching between scenes during gameplay.
6. Improved prop textures for some locations.
7. Lowered the system requirements to run the game (as shown below).