Painscreek Devlog #5: Who Is Steven Moss? 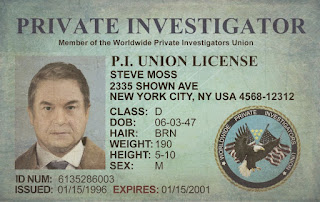 When a game has no quest journal, no hint system, a playtime average of over 10 hours, and it requires players to trek over twelve locations, is there anyway to prevent people from getting lost? Hints are important in entertainment. A hint system is found in nearly all 'hidden object' games. In more modern games, important items either have a glowing aura around them, or the main characters have a heightened vision that makes the important items stand out from the background. Both of these are useful techniques and helps to ease the players' frustrations when they get stuck. However, we felt that the above methods would break the immersion of our game. But, even though we didn't want to break the immersion we still had to consider the following: how can we prevent players from simply getting stuck? Would the systems mentioned earlier cheapen the whole feel for everything? Would they ruin a detective game that attempts to mimic real life? What could we do that wouldn't be in-your-face? Could we use an in-game person?


Our original idea was an author who was researching the death of Vivian Roberts. Through him, players can uncover more of the town's backstory, material that would be awkward to deliver through the NPCs' diaries. Halfway through, we changed him into an NPC's younger brother who had visited Painscreek in the mid 80s. He was interested in interviewing people and collecting a great deal of his own notes. All he wanted was to get to the bottom of everything. But why would he want to know the truth? What was his purpose? By the time the game reached alpha testing we scrapped the idea. Still, we wanted someone from outside Painscreek, someone who could provide an outsider's perspective. Someone who could give us information that no normal citizen would just list off needlessly.

These two people, and their sole purposes, eventually evolved into the P.I. Steven Moss. He was a private investigator hired to find the truth behind the murder of Vivian Roberts. His role was to guide Janet at certain points in the game, as a unique form of giving hints. In a way, Steven Moss' progress sets the path that Janet will tread.

What kind of hints can Steven Moss offer players? First are the codes found in his notes. These are secrets that seemed natural in a private investigator's notepad, secrets that just would feel odd if they were found in an NPC's diary. Second, the photographs. These show various locations that players should find to be important. Nothing that Steven Moss kept was unimportant. He wasn't one to keep junk. The third and final type of hint Moss would give was to relay to the players that there was someone stalking the town. Moss' own investigation is found to have come to some unfortunate ending, showing that the mastermind doesn't want the secrets exposed. That the closer the player comes to the truth, the closer the killer is to making sure Janet won't leave.

Although he serves as a unique hint system in the game, players don't have to rely solely on what he's left behind. The clues are, however, interesting because of the questions they'll lead the players to consider. Things to look into, places to revisit. Most of the time there will be a reward for pursuing that path, such as looking into the hospital after finding a unique photo.

So what happened to Steven Moss after he fulfilled his role? This was an open-ended question that we decided to leave in, believing that players could have fun with the various potentials. We only left enough for guesses and assumptions. However, we may step in and tie up as many loose ends as we can, possibly with a DLC somewhere down the road.